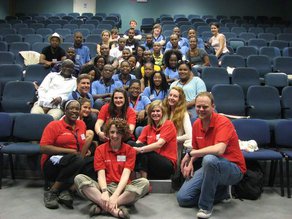 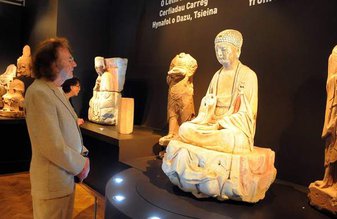 NMDC works in partnership with ICOM-UK to deliver an annual conference focusing on the practicalities of museums working internationally.

2019: 'Working Together to Achieve More'

The 7th edition of the conference will take place at the British Library on Monday 11th March 2019. The theme 'working together to achieve more' looks at the role that international networks can have in supporting cross-border collaborations and partnerships when the world is becoming more fragmented.

Tickets can be purchased at https://wiconf2019.eventbrite.com

The 6th edition considered how museums can respond to the new international context in light of recent world events, while maintaining relevance for both domestic and international audiences.

The 2017 conference took the pulse of working internationally in a post-Brexit world.  Asking: What issues will UK museums face in the months and years ahead as the UK seeks political separation from the EU?  How can we maximise the opportunities and manage the challenges ahead of us?

The 2016 Conference was filmed and the highlights can be viewed here: https://www.youtube.com/channel/UCTC65egrC1jANqpDFmE4DCg

And the presentations from the 2016 Conference are here.

Following the 2014 conference, the following session summaries were produced:

After the 2013 Conference, the Association of Independent Museums produced a Success Guide to Working Internationally.

The objects in museums' collections tell stories about people, places, nature and thought. The stories told by these objects, brought to life by study and display, help more easily explore common themes and threads through history and relate those to the present day. Some of the most comprehensive and internationally important collections of natural history, ethnography, technology, art, literature and design are held by UK museums - and so these world collections tell world stories.

UK museums have a long history of working in partnership overseas and continue to do so to maintain their pre-eminence. However, this activity can have a wider impact beyond the cultural output. Museums have a role in economic growth and investment, cultural exchange, the preservation of memory and the exploration of identity, and diplomacy.

The NMDC paper World Collections, published in May 2012, illustrates the breadth of museums' international work and explores its wider impact. Download the paper here.

A Wealth of Treasures is a guide to the collections held in UK museums. It was written for international museums to demonstrate the breadth of collections and the range of museums who might wish to develop international partnerships. It covers nine themes: art, contemporary art, decorative art, fashion, archaeology, science and industrial heritage, world cultures, social history and British icons.

Read A Wealth of Treasures.

UK museums are involved in a huge range of projects and partnerships with organisations all over the world.  International activity includes:

Several national museums and cultural organisations worked together on the World Collections Programme, lead by the British Museum, to develop a strategic programme of activity, using the British national collections in target regions around the world for cultural diplomacy, international development and to improve perceptions of Britain and our cultural institutions.

In February 2007, the think tank Demos, in partnership with the British Council, the British Library, the British Museum, the Natural History Museum, the Royal Botanic Gardens, Kew, the Royal Opera House and the Victoria and Albert Museum, published a report on cultural diplomacy. The report argued that culture plays an important role in building and sustaining relationships between countries, but often these activities are under-valued, under-resourced and are not integrated into the work of the government. The report asserted that the value of cultural activity comes from its independence and the fact that it represents and connects people, rather than governments. It called for cultural institutions to retain their independence and be brought into the policy-making process. The report set out a series of policy recommendations regarding governance, leadership, cultural literacy, technological challenges and the London 2012 Olympic Games.

In 2002, NMDC published International Dimensions, a detailed report on the extent and nature of international work undertaken by NMDC members.

The report, produced in association with AEA Consulting, demonstrates both the nature and extent of our international activities and the way in which those activities extend, and have an impact, far beyond what has traditionally been recognised as the field of operation of museums.